﻿Dramatic cob wall failure: a result of water ingress combined with a thick layer of cement render. Fortunately the Client was warned of the imminent threat by BCS and moved out of the living spaces 4 days before the collapse.﻿

​The Importance of Lime Mortars 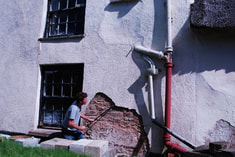 In the past there has been a considerable amount of harmful building work carried out to traditional vernacular buildings, not least of which has been the use of cement based mortars and renders. Solid walled masonry structures, including cob, remain dry on the principle that any damp ingress that does occurs is freely allowed to evaporate back out. Lime mortars remain relatively permeable after setting and therefore provide uninhibited drying-out. In the past cement mortars were used on damp buildings in the belief that they would stop the wet getting in. This can sometimes cause the opposite effect: Cement is a rigid material prone to cracking as a result of expansion and contraction caused during periods of atmospheric temperature variation.  Through capillary action water can pass through the fine cracks and then spread throughout the wall. After a cement rendered wall becomes damp the moisture is unable to evaporate out and  instead can begin to migrate inwards, often leading to damp internal walls. If a cob wall becomes excessively damp it can, in some instances, lose its structural integrity and the wall can become prone to sudden and catastrophic collapse, an example of which is shown above.